High-Rise Office Moves and How We Cope 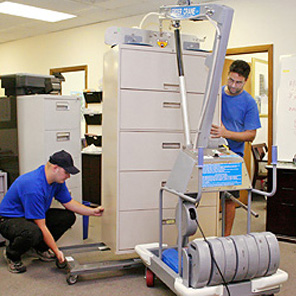 There’s almost a comedy sketch feeling to any discussion around those poor old office removals guys trying to cope with furniture and other heavy objects several floors up.

Truth to tell, it can sometimes be something that tests the muscles of our guys. Having said that, they’re strong, fit, good humoured and usually can cope!

Sometimes business relocation, Christchurch and elsewhere, can be a challenge if it’s based around an ‘upper’ location and the building concerned doesn’t have good modern facilities such as a freight or goods lift. For example, some bigger office equipment just can’t be squeezed into a smaller people-lift and that might mean some heavy-duty puffing up and down the stairs.

It happens and if it does, we’ll cope!

There might be times though when muscle power alone won’t do the job. Sometimes something can simply be too heavy or too unwieldly (or both) to make the stairs a viable proposition.

In such cases, we may be able to use what’s essentially a portable external lift. It can run up the side of your building to a convenient widow or other access point and we can move stuff down from there.  Sometimes these work vertically but they can also operate at an angle, something along the lines of an elevator.

That does, of course, assume that your building has suitable room for such devices at ground level and that they can reach an access point on your floor.

The key message here though is not to worry. We haven’t yet encountered an office on an upper floor that was too difficult and we ALWAYS come up with a solution.

So, if you’re contemplating a move from an upper floor, don’t assume it’s going to be a nightmare. Our job is to find solutions to your situation and we’ll do exactly that.